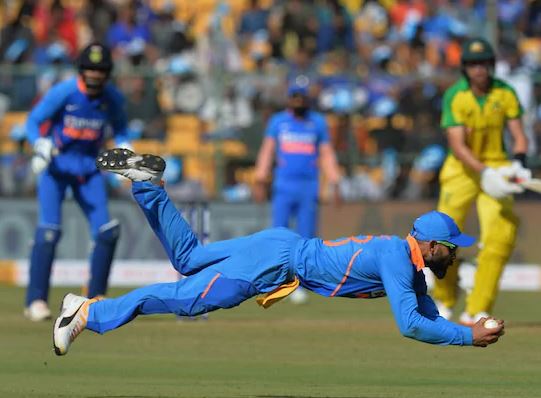 Talking about the m atch Australia won the toss and elected to bat first. Batting first Australia team added 286/6 in 50 overs on the scoreboard. The winner of the match will take off the series on its name.

For Australia, the former captain Steve Smith scored his 9th ODI century and scored 132 runs in his inning before he was caught by Shreyas Iyer on the ball of Mohammed Shami. This was the first ODI century for Steve Smith after January 2017.

The new young batting sensation from Australia Marnus Labuschagne today also scored a tremendous fifty for the team and made a good partnership for Australia.

The 25 years old young Marnus playing his only 3rd ODI registered his Maiden fifty in One Day Internation Cricket before getting out to Jadeja with a special effort from the Indian captain Virat Kohli at covers.

It was an extraordinary effort from the Indian captain, Virat Kohli, to dismiss the inform batsman Marnus Labuschagne. This all happened on the 3rd ball of the 32nd over from Ravindra Jadeja.

It was a quicker delivery from the Indian all-rounder Ravindra Jadeja and on the Marnus tried to play an inside out shot through the covers. But it was his bad luck that ball ended up in the hands of the Indian captain Virat Kohli.