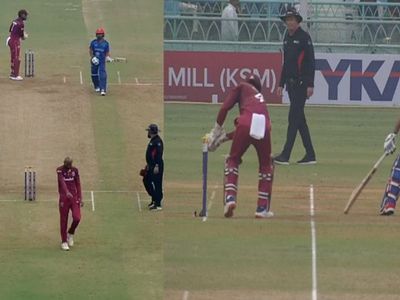 West Indies beat Afghanistan by 7 wickets in the first ODI at Lucknow and took the lead by 1-0 in 3 match series. Afghanistan scored only 194/10 batting first after losing the toss. West Indies team chased down this target in 47 over with 7 wickets in hand.

A similar incident of Brain Faid happened during yesterday’s match between West India and Afghanistan. West Indies is on tour of Afghanistan for 3 ODI, 3 T20I and for the only test.  During the first inning when Afghanistan was batting after losing the toss, Ikram Alikhil got run out in a very unusual way.

Afghanistan was a good position at 126 for 2 after losing both the openers very early. On the 3rd ball of 27 over Rahmat played a shot and took a single to complete his fifty. On the other hand, Ikram was so keen to congratulate his partner that he got himself run out in a very unusual way.