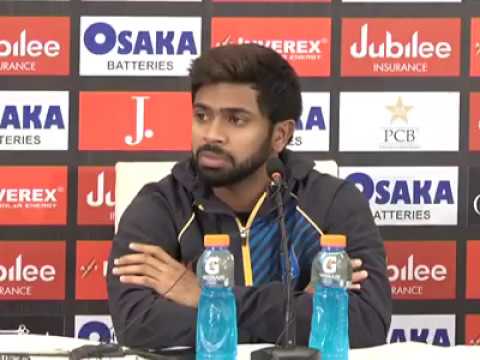 Sri Lankan batsmen Niroshan Dickwella has faced an embarrassing question in the post-match press conference where he played with a straight bat when a journalist made an epic blunder.

Sri Lanka have been playing their first Test against Pakistan in Rawalpindi and Dickwella attended the media after the day’s game was limited by rain.

Following bad light on Wednesday, it was the rain which played the spoilsport on Thursday in the Test. A little over 18 overs of play could be possible on the second day during which Sri Lanka lost Niroshan Dickwella for 33 to the young pacer Shaheen Afridi after the game resumed on 202 for five.

The visitors were 263-6 on day where Dhananjaya de Silva was unbeaten on 72 off 131 balls.

However, De Silva hit 11 fours in his knock of 72* with Dilruwan Perera not out on two when the umpires decided to call off play for the day.

Niroshan Dickwella and his funny response

Dickwella was mistaken for his teammate Dhananjaya de Silva – not once but twice during the press meet.

However, his surprise and reaction to the blunder left everyone in splits whoever was there.

Dickwella had, in fact, scored 33 before getting dismissed in his team’s 1st innings while de Silva was still unbeaten in the middle at stumps having scored a stable 72.

After the clarification, the journalist again continued with the same question.

“You played well on this pitch and in these conditions. Are you thinking a hundred on this pitch?” the journalist asked.

“You mean me? I am Dickwella not de Silva,” Dickwella replied with a laugh.

“I got out. I am already out in the pavilion. Maybe in the second innings,” he added.

Watch video on next page