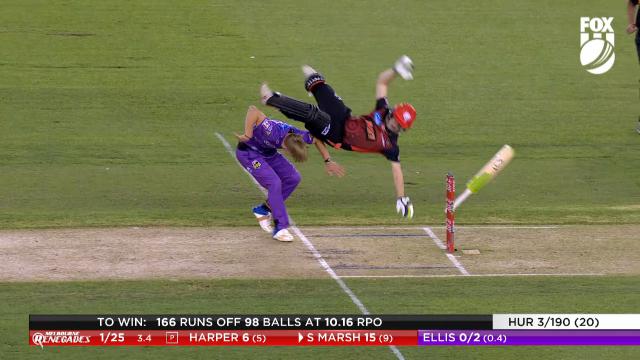 The batsman on the cricket field makes every effort to save his wicket. One such attempt was seen in the Big Bash League but in the meantime batsman, Sam Harper fell badly.

The incident occurred on Tuesday in a match no 47th of BBL 2019/20 between the Melbourne Renegades and Hobart Hurricanes. Sam Harper came to bat at No. 3 for the Melbourne team at Dockl ands Stadium.

This incident happened on the 4th ball of the 4th over when Sam Harper played a shot toward Mid Off on the ball of Nathan Ellis and ran for a single. Fielder immediately caught the ball and threw it to the non-striker end. Harper did not see the bowler and he fell on top of him to save his wicket while running.

Sam Harper has taken to the hospital

Harper lay on the ground after the fall, then the doctor was called. However, Harper returned after being retired hurt. BBL wrote on Twitter that he was replaced by Tom Cooper. Harper was then batting on a personal score of 6 runs. He was later taken to the hospital.

The latest on Sam Harper: The club's medical staff have confirmed Harper sustained concussion in the incident earlier this innings. He has been taken to hospital as a precaution for further observation #GETONRED

The match was won by Hobart Hurricanes by 4 runs. The Hobart team scored 190 runs for 3 wickets thanks to half-centuries from McAllister Wright (70 *) and Matthew Wade (66). The Melbourne team could only manage 186 runs for 4 wickets in 20 overs. Shaun Marsh (56), Mohammad Nabi (63) and Webster (50) scored half-centuries for him.