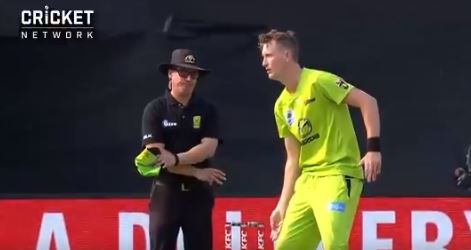 It was a horror start for Sydney Thunders as they lost 2 quick wickets to Glenn Maxwell. First Glenn Maxwell bowled out the opener Alex Hales for a duck on the 3rd ball of the match. After losing the first wicket in the very first over to a part-time bowler Sydney Thunder was put under pressure by Melbourne Stars.

Not only Alex Hales his opening partner Usman Khawaja was also dismissed in the same way by Glenn Maxwell in his next over. With a bad start, Melbourne Stars could reach only 142/7 in 20 overs.

Alex Ross was the high scorer for Sydney Thunders. He scored 40 runs in 32 balls with 2 fours and 2 sixes. Haris Rauf for Melbourne Stars took 3 wickets in his 4 over spell while giving 24 runs.

Melbourne Stars also got a bad start as they lost the opening batsman Nic Maddinson in the very first over for a duck. Daniel Sams bowled out Nic Maddinson on the last ball of the first over after 5 consecutive dot balls.

But after that, a 123 runs partnership between Marcus Stoinis (58 runs in 51 balls) and Nick Larkin (65 runs in 45 balls) ensured that they can easily reach to the target to get 2 points on the points table.

It all happened in the 3rd over the 2nd inning of the match when Larkin was facing Chris Morris. On the 4th ball when Chris Morris was taking run-up ball slipped from his hand and he attempted a fake makading.