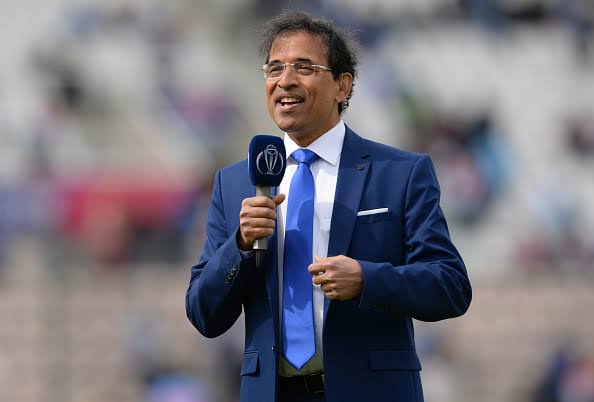 Experienced cricket commentator Harsha Bhogle has come up with his ODI and T20I team of the year. The ICC Cricket World Cup took place in June-July this year. However, all the teams have shifted their focus back in the T20 format to prepare for the next year’s T20 World Cup.

While Speaking on CricBuzz’s official YouTube channel, Bhogle shared his teams. He picked up Rohit Sharma and Jason Roy for his team’s opening slots. Rohit hit seven tons in the ODI, Roy played with a great strike rate of almost 120. Virat Kohli placed at the No. 3 position who scored almost 1,300 runs in 24 innings at an average of 58.72.

Pakistan T20I captain Babar Azam placed at No. 4. He averaged above 60 with three tons this year. For No. 5 and No. 6 slots, the veteran commentator chose Bangladesh all-rounder Shakib Al Hasan and England all-rounder Ben Stokes. He picked up England’s wicketkeeper-batsman Jos Buttler for the responsibility behind the stumps.

For bowlers, he picked up Mitchell Starc, Jofra Archer, and India’s key player for across formats — Jasprit Bumrah. He picked up Indian spinner, Kuldeep Yadav for the spinner’s spot.

Harsha Bhogle picked his T20 team of the year too. For the opening slots, he chose Australia’s David Warner and India’s KL Rahul. Warner averaged 70-plus in the T20s and scored more than 1200 runs in 25 innings, including two centuries and 13 fifties. KL Rahul has scored 1262 runs in T20s with an average of 50.48. KL Rahul is also the wicket-keeper of the team.

For the middle-order, he chose India captain Virat Kohli and veteran AB de Villiers. In 24 innings, Kohli has scored 930 runs while his Royal Challengers Bangalore teammate, de Villiers, has smashed 1580 runs in 43 innings.

Rashid Khan has been selected as the spinner’s spot in Bhogle’s T20 team of the year alongside South Africa veteran Imran Tahir. The duo has taken 137 wickets in 102 T20 games. England’s Chris Jordan, Sri Lanka’s Lasith Malinga, and Indian bowler Deepak Chahar have been included in the bowling unit.

Jordan claimed 41 wickets in 33 games whereas the Sri Lankan pacer took 34 in 26 games. Chahar was impressive too with 55 T20 wickets.