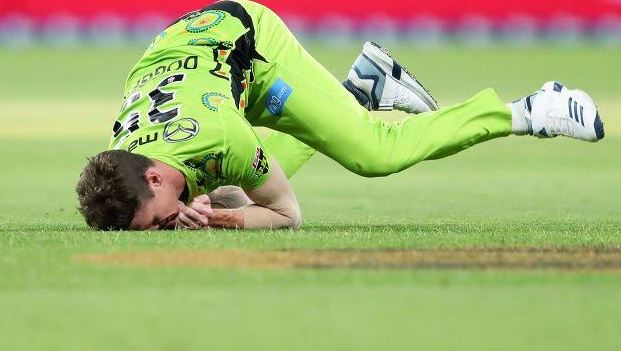 The Australian fans are enjoying their premier T20 tourney, the Big Bash League right now as the ninth season of the tournament is currently underway. The Melbourne Stars have been the most consistent team of this year however, a player named Brendan Doggett stole the show during the match between Perth Scorchers and Sydney Thunder.

Following the footsteps of Manish Pandey and Virat Kohli, Doggett took an unbelievable catch for Sydney Thunder and that too after dropping three catches in a row. Unfortunately, Sydney Thunder could not win that match.

The 46th match of BBL 09 took place between Perth Scorchers and Sydney Thunder. The Sydney-based team batted first in the lopsided encounter. Alex Hales starred for the neon green outfit as he played an incredible knock of 85 runs. His innings helped Sydney score 153 runs at the loss of 5 wickets in the first innings.

In reply, Liam Livingstone and Josh Inglis’ half-centuries helped Perth Scorchers win the match with ease. Although both of them lost their wickets in the end, the job was done for the home side.

Brendan Doggett takes a blinder in the BBL match

Before beginning the description of the catch, the fans should first know that the Twitterverse is calling this day “Every Dog has its day and today was the day of Brendan Doggett.”

Resembling his surname, the fielder had dropped three catches for Thunder before he gave his 100 percent and completed a marvelous catch of the opening batsman, Inglis.

The opener was looking set to drive his team home as he had already scored 58 runs off 41 deliveries. He had hit 6 fours and 2 sixes in his innings before he flicked one ball of Gurinder Sandhu. This catch has gone viral on the internet and every cricket fan should praise Doggett irrespective of the three drops that he committed.