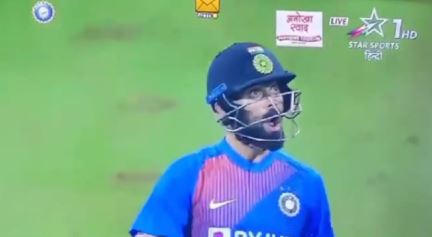 The rivalry between Virat Kohli and Kesrick Williams has been one of the biggest talking points of the series between India and the West Indies. So far, the battle has been so exciting that the fans had been waiting for the third T20I with utmost anticipation.

Virat Kohli had won the first battle by hitting Kesrick for a six and then celebrating in his trademark notebook manner. Actually, the West Indian fast bowler had got Virat out during a T20 match in 2017. Hence, the Indian captain avenged that fall of a wicket in his own style.

However, as they say, everyone gets an equal chance to celebrate in this world, Williams picked up Kohli’s wicket in the 2nd T20I match at Thiruvananthapuram. Instead of taking out his notebook, Williams preferred to stay calm and not celebrate the wicket.

India batted fantastically in the third T20I match as the opening duo of Rohit Sharma and KL Rahul laid a solid platform for the middle-order batsmen. Unfortunately, Rishabh Pant got out for a duck but, Virat saved the day by playing a knock of 70 runs.

Though it is not known who will win the series between India and West Indies, the one thing which the fans know is that Virat has won his battle against Kesrick.

After the scoreline between them was 1-1, the right-handed batsman smashed him for a beautiful six in the third match and gazed at him with surprise. This created a hilarious moment in the match and the fans absolutely loved what Kohli did.