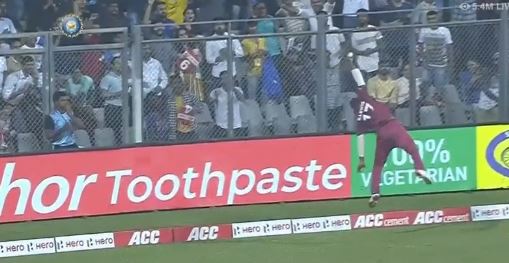 The series between India and West Indies has been like a movie. There has been action, entertainment, thrill and class in the first two T20Is.

With the teams standing even-steven after the first two matches, the fans expected the players to give their 100 percent on the field during the third T20I match.

Luckily, the Wankhede Stadium in Mumbai is hosting this match and the pitch is supporting the batsmen a lot. Rohit Sharma and KL Rahul have been unstoppable on this wicket as India has got off to a flier.

Kieron Pollard who has a lot of experience of playing at this venue is looking clueless as a captain because his bowlers namely Sheldon Cottrell, Jason Holder, Kesrick Williams, and Khary Pierre conceded 72 runs in the first six overs.

Evin Lewis shines as a fielder

While the bowlers have been thrashed by Rohit Sharma and his opening partner, KL Rahul in this match so far, the team’s opening batsman Evin Lewis saved the grace of West Indies with a brilliant effort in the fielding department. He pulled off an unbelievable save at the boundary line and saved four runs for his team.

This incident happened during the fifth over of India’s innings. Khary Pierre was the new bowler introduced in the attack. Rohit hit him for a six on the first ball before attempting another big shot on the second ball.

However, Pierre was lucky as the ball did not go to the boundary. First, Lewis almost pulled off a bl inder but when he realized that his body balance is going in the opposite direction, he let the ball in the field and crossed the advertisement boards. India got only 2 runs in the end.