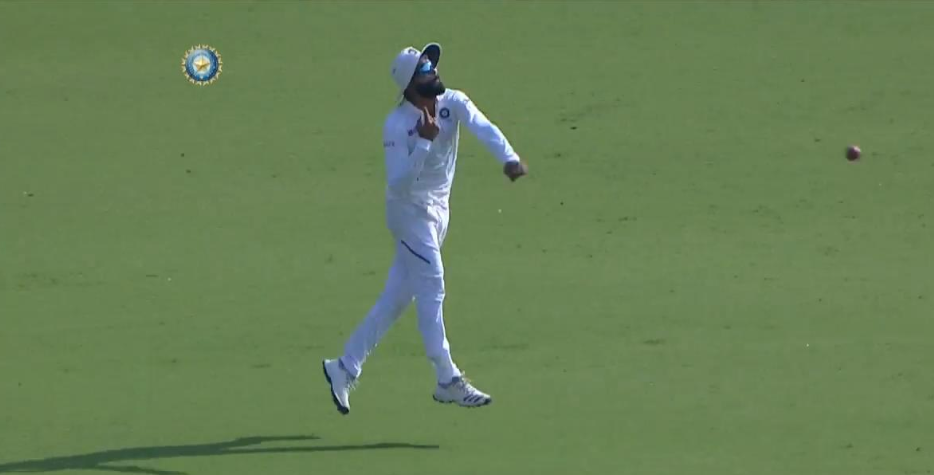 1st test match is underway between India National Cricket Team and Bangladesh Cricket Team at Indore. 1st day was brilliant for the hosts as they bowled out Bangladesh for just 150 runs in the first inning.

Talking about the day visiting Team Captain Mominual opted to bat first after winning the toss. From the beginning, only the Indian Bowlers started knocking down the batsman of Bangladesh.

At day 1 stumps Bangladesh was bowled out only for just 150 runs in 58.3 overs. For India, Rohit Sharma is the only player who lost his wicket on Day 1. Cheteshwar Pujara and Mayank Aggarwal batted very well and take the team score to 86/1 at Day 1 end and Now India team trails by just 64 runs.

During the match when Bangladesh was at 142/8, Abu Jayed pushes the ball towards backward point. Ravindra Jadeja was standing at that position and he missed that run-out chance. Not only run out chance Ravindra Jadeja also gave a boundary of overthrow.

But you just can’t take a second chance on Jadeja’s rocket arm. On the very next ball, Taijul Islam plays a shot toward fine leg and Jadeja standing over there throws the ball like a rocket. While taking the second run Taijul Islam left short a few yards from the crease and got run out.

He also dived desperately but that was not also good enough for him. Watch the video on the next page.