Indian national cricket team under the captaincy of Virat Kohli has won the first T20I at Auckland and started the tour with a win. In the 5 matches, the T20I series India has taken the lead by 1-0.

Virat Kohli the Indian captain won the toss and elected to bowl first and asked the visitors by looking at the pitch. After winning the toss New Zealand batsman started strongly and started smashing at the beginning only.

The Indian team chasing the target of 204 lost an early wicket when Rohit Sharma got out to Mitchell Santer for the individual score of 7 runs. But after losing Rohit Sharma, KL Rahul(56 in 27 balls) and Virat Kohli (45 in 32 balls) added a good partnership to keep alive the team in the run chase. 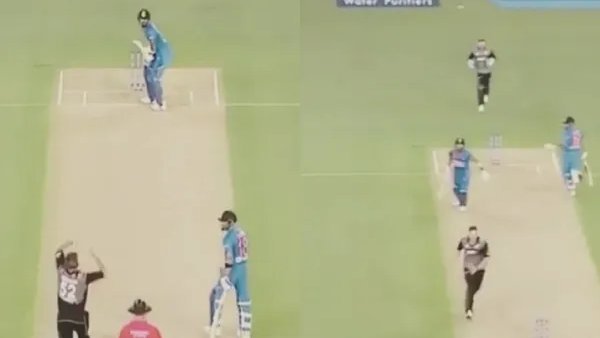 During the match when India was chasing the target a weird moment happened when KL Rahul and Virat Kohli were on the crease. That moment happened in the 6th over when on the second ball KL Rahul tapped the ball of Hamish Bennett towards cover off for a single.

After coming out 2-3 yards out of the crease KL Rahul hesitated but the Indian Captain Virat Kohli was not in the mood to go back and KL Rahul kept standing and the cover fielder had a good chance to run out KL Rahul.

But the fielder missed the chance and KL Rahul got saved himself. Despite this chance, the fielder covering the ball also had a chance but he also missed and New Zealand tam wasted the two run-out opportunities on a single ball.