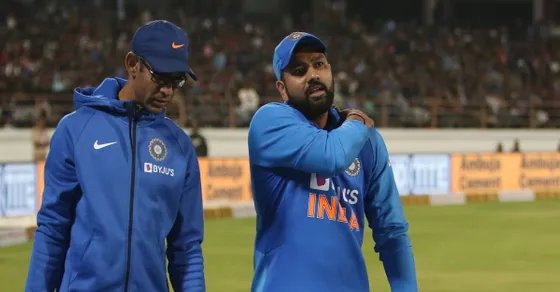 The India vs Australia series has been full of ups and downs. Although it is a very short series, the fans have witnessed all sorts of action in the first 2 games.

First, India lost the first ODI by 10 wickets, registering their first 10-wicket loss in over a decade. In the second game, the Men in Blue bounced back in style as they crushed Australia with a fiery batting display.

The decider will take place tomorrow i.e. on 19th January and the fans may witness a whole new opening combination in the Indian team for the 3rd match.

Rohit Sharma and Shikhar Dhawan, the team’s first choice openers have both picked up injury scares in the 2nd ODI of the series.

These injury blows have raised the tensions in the Indian dressing room. Already Rishabh Pant is in trouble following his concussion and now, Shikhar and Rohit may soon join him in the medical room.

Talking about Shikhar Dhawan’s injury first, the left-handed batsman was hit on the ribs during his 90-ball 96 runs innings. On the other side, his opening partner, Rohit injured his shoulder in the Australian innings.

As team India will have no net sessions till the beginning of the 3rd ODI, both the openers will get ample amount of time to rest. Shikhar had also entered the field in the 2nd innings so, he would have recovered from his injury.

Besides, Rohit also would have recovered as he has worked very hard on his fitness levels. Captain Virat Kohli had mentioned that Sharma will be fit to play the 3rd ODI hence, the fans should not be tensed much.

As far as fitness is concerned, Rohit and Dhawan would even make themselves available to play if they are 80 percent fit to play because they are national level players and the small injuries will not lower their confidence levels.