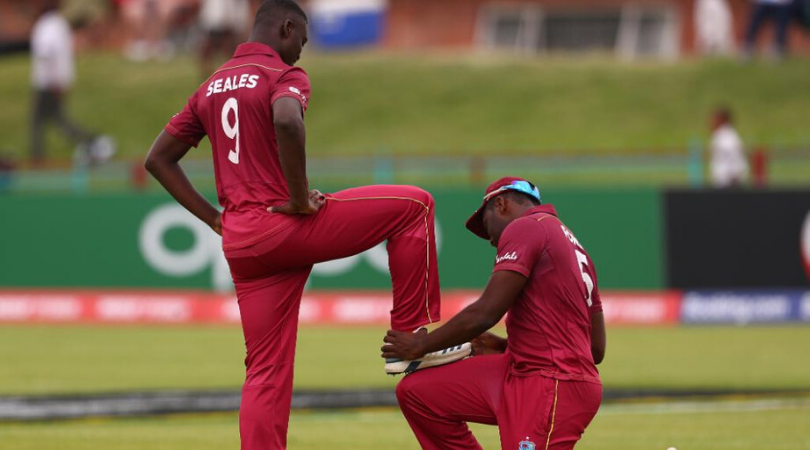 We have seen different celebrations from different players after the dismissal. West Indies U19 team is no less. They have shown a unique shoe cleaning celebration against Australia in the ongoing ICC U19 World Cup 2020.

The West Indies team was considered as one of the nightmares for the opponents a few decades ago, although they are not that much threat no. But they certainly know how to be in the limelight – be it with a comfortable victory or unique celebration.

From Chris Gayle to Kieran Pollard, Cottrell to Russell, West Indies have produced some quality players who are pleasing to watch. Be it their game or celebration, all are eye-catching and as far as the ICC U19 World Cup 2020 is concerned, they will have several funny characters in their young Bridget.

West Indies took on Australia in their opening match of the ongoing tournament. West Indies captain Kimani Melius won the toss and put the mighty Aussies into bat. But Australia failed to hold the innings as they quickly lost 4 wickets. That made the captain’s decision to bowl first fruitful.

However, a fifth-wicket partnership between Jake Fraser-McGurk (84) and wicketkeeper-batsman Patrick Rowe (40) seemed to take the game away from Windies.

Jayden Seales was the bowler who provided with the breakthrough in the 33rd over when Rowe hit the ball to Melius. Seales’ bowling partner then successfully produced the unique moment when he got down on his knees and pretended to clean the boot.

After the dismissal, Australia failed to bounce back in the innings and it crumbled as the middle-orders failed to steady the ship. They were bowled out for 179 without even finishing their allotted overs. On the other hand, Windies completed the chase with ease in the end after being struggled at 92/5 at one stage in the middle.